Using GraalVM, you can run Java applications normally on the JVM, in Native Image, and now on Truffle. Java on Truffle is an implementation of the Java Virtual Machine Specification, Java SE 8 and Java SE 11, built upon GraalVM as a Truffle interpreter. It is a minified Java VM that includes all core components of a VM, implements the same API as the Java Runtime Environment library (libjvm.so), and reuses all JARs and native libraries from GraalVM. See the Implementation Details for more information. The project name behind this implementation is “Espresso”. Its open source version is available on GitHub.

The Java on Truffle execution mode runs Java via a Java bytecode interpreter, implemented with the Truffle framework – an open-source library for writing interpreters for programming languages. Now Java can be executed by the same principle as other languages in the GraalVM ecosystem (JavaScript, Ruby, Python, R), directly interoperate with those languages, and pass data back and forth in the same memory space. Besides complete language interoperability, with Java on Truffle you can:

Java on Trufle is an experimental technology in GraalVM, but already passes the Java Compatibility Kit (JCK or TCK for Java SE).

To run Java on Truffle, you need to have GraalVM installed. The Java on Truffle runtime is not available by default, but can be easily added to GraalVM using the GraalVM Updater tool.

For GraalVM Community Edition users, run the following command to install Java on Truffle from the GitHub catalog:

The installable’s name, espresso, is the project code-name, it is used to avoid ambiguity with the other ways Java code can run on GraalVM.

For GraalVM Enterprise Edition users, download Java on Truffle from Oracle GraalVM Downloads. Having downloaded the appropriate JAR file in consideration of the operating system and underlying Java SE version, install it with:

It installs the jvm runtime library under the GRAALVM_HOME/lib/truffle/ location.

You can run a Java application on Truffle by passing the -truffle flag to the standard java launcher. This is similar to how you used to switch between the -client and -server JVMs.

To execute a class file:

To execute a JAR file:

Using Java 11 based GraalVM distribution, you can also run a Java application from the main class in a module, or run a single source-file program:

By default, Java on Truffle runs within GraalVM by reusing all GraalVM’s JARs and native libraries, but it is possible to “cross-version” and specify a different Java installation directory (java.home). It will automatically switch versions regardless of the host JVM.

Java on Trufle is an experimental technology in GraalVM, and peak performance is currently 2-3x slower than HotSpot.

The startup time will not match the speed offered by the regular GraalVM just-in-time (JIT) execution yet, but having created a fully working Java on Truffle runtime, the development team is now focusing on performance. You can still influence the performance by passing the following options to java -truffle:

To ensure you have successfully installed Java on Truffle, verify its version:

Taking this HelloWorld.java example, compile it and run from the command line:

Taking some real-world applications, try running Spring PetClinic - a sample web application that demonstrates the use of Spring Boot with Spring MVC and Spring Data JPA.

To run a Java project on Truffle from an IDE requires setting the Java on Truffle enabled GraalVM as a project’s default JDK. For exampe, to run the Spring PetClinic project using Intellij IDEA, you need to:

1. Navigate to File, then to Project Structure. Click Project, and then click Project SDK. Expand the drop down, press Add JDK and open the folder where you installed GraalVM. For macOS users, JDK home path will be /Library/Java/JavaVirtualMachines/{graalvm}/Contents/Home. Give it a name, and press Apply. 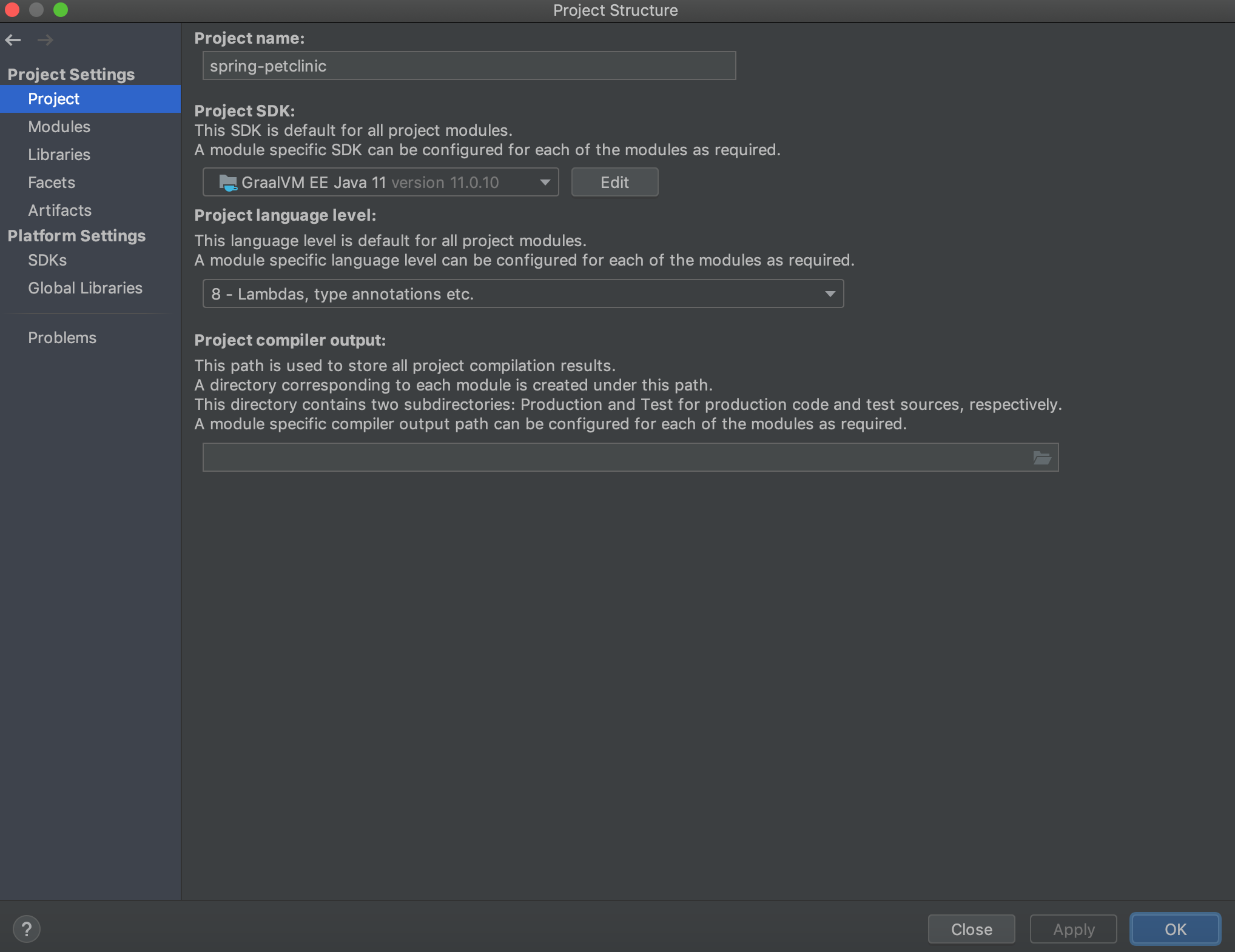 2. Generate sources and update folders for the project. In the Maven sidebar, click on the folder with the spinner icon: 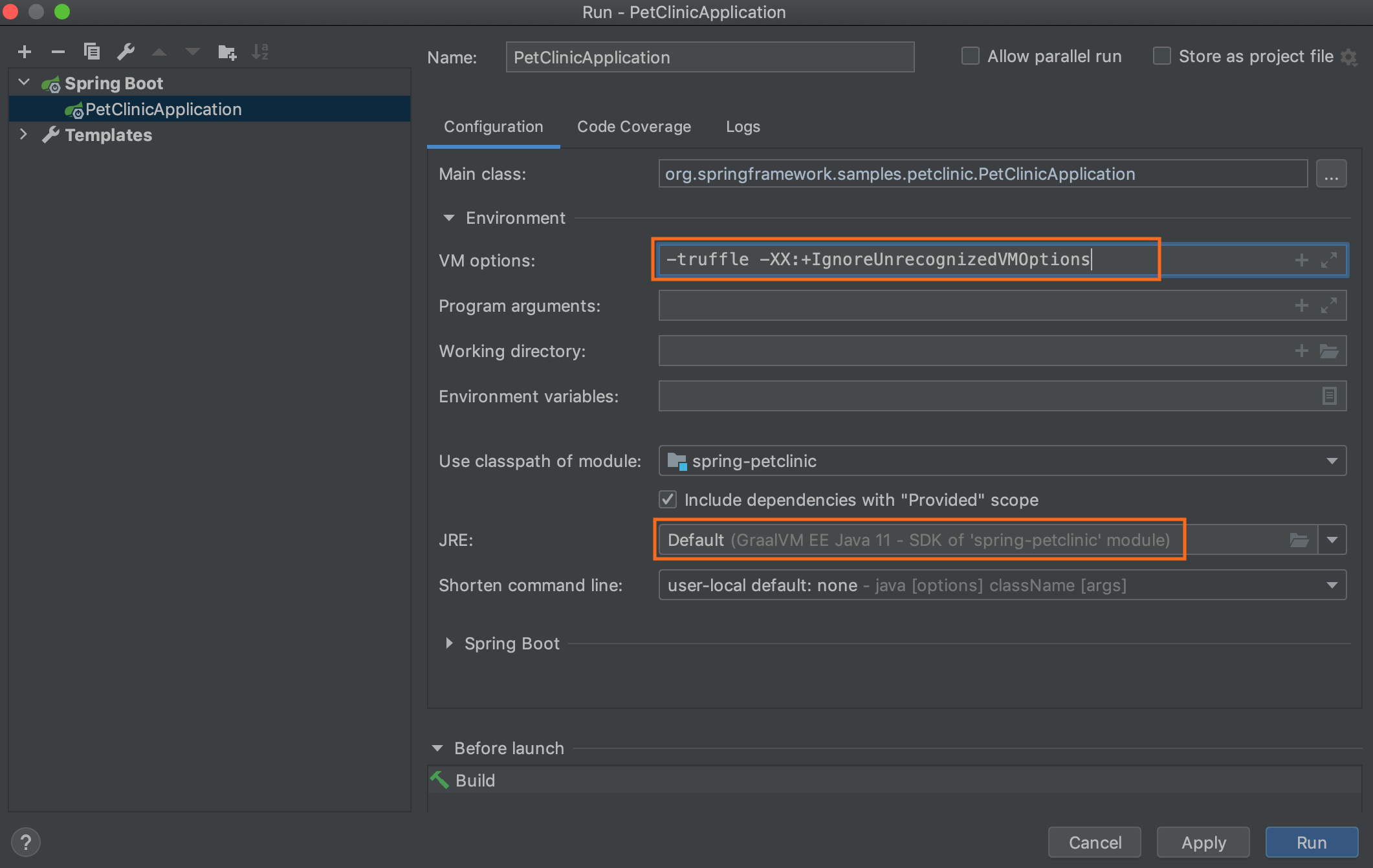 It is necessary to specify -XX:+IgnoreUnrecognizedVMOptions because Intellij automatically adds a -javaagent argument which is not supported yet.

You do not have to configure anything special to debug applications running Java on Truffle from your favorite IDE debugger. For example, starting a debugger session from IntelliJ IDEA is based on the Run Configurations. To ensure you attach the debugger to your Java application in the same environment, navigate in the main menu to Run -> Debug… -> Edit Configurations, expand Environment, check the JRE value and VM options values. It should show GraalVM as project’s JRE and VM options should include -truffle -XX:+IgnoreUnrecognizedVMOptions: -truffle to run Java on Truffle, and -XX:+IgnoreUnrecognizedVMOptions as a temporary workaround since the Java on Truffle runtime does not yet support attaching Java agents.

What to Read Next #

To learn about the implementation approach, project’s current status, and known limitations proceed to Implementation Details.

You can already run some large applications like the Eclipse IDE, Scala or other languages REPLs, etc. in the Java on Truffle execution mode. We recommend having a look at the collection of Demo Applications.

If you have a question, check the available FAQs, or reach us directly over the #espresso channel in GraalVM Slack.